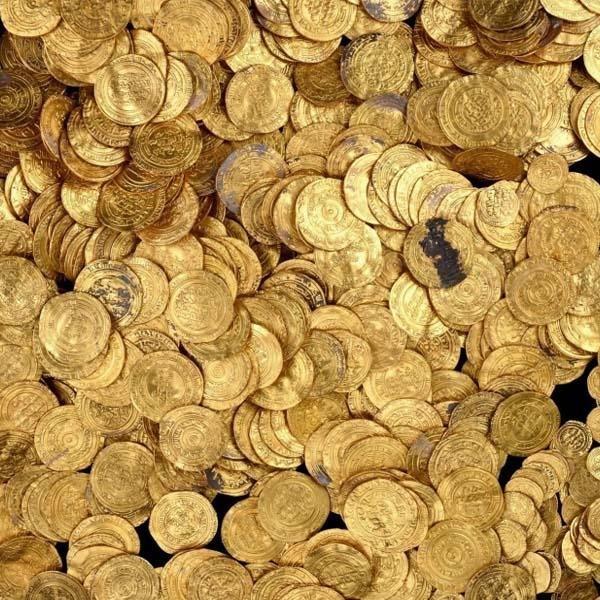 Can you imagine having a metal detector and finding a real treasure dating back centuries?

Gold coins are part of these treasures that were hidden for many years and were discovered, by chance, and with a lot of luck, by people like you, who love adventure.
But they were not alone, a metal detector supported them in their search and these were some of the results:

Peter Whatling lost a hammer in 1992 in the town of Hoxne in Suffolk, so he asked a retired amateur metal detector named Eric Lawes to help him with the artifact to find the object.
The big surprise for both of them is that they didn’t find the hammer, but real gold coins!
This treasure is composed of more than 14 thousand Roman gold coins, also silver and bronze.
They’re presumed to be from the late 4th and early 5th centuries. Fascinating, right?

36 gold coins from the Byzantine period, gold and silver jewelry, a gold medallion with a menorah and a 10-centimeter medallion with a ram’s horn and a scroll of the Torah engraved on it were found in 2013 in an excavation of the Hebrew University.
Archaeologists estimated that these pieces were abandoned during the Persian conquest of Jerusalem in the year 614.

In 2010 a metal detector found more than 52,000 Roman gold coins near Frome in Somerset, England.
The coins were in a pot of pottery dating from the years 253-305, and it is presumed that they were buried as an offering for a good harvest.
These coins were purchased by the NationalHeritage Memorial Fund.

An anonymous couple in 2014 found in the garden of their home under an old tree while walking their dog in Santa Ana, California $10 million in gold coins, presumed to be 19th century.
The coins were in six metal cans and some are so rare that they were valued at one million dollars.

In 2015, Eric Schmitt and his family recovered 52 gold coins that were part of one of the Spanish Fleet galleons that sank on July 31, 1715, in the area due to a hurricane to a depth of 4.5 meters off the coast of Fort Pierce, in St. Lucie County (Southeast Florida).
This was achieved thanks to a metal detector and one of the gold coins is so unique that it was valued at $500,000, according to the Orlando Sentinel newspaper.
In conclusion, in any situation or place, you can find a treasure and you must be well equipped for it. So check here the steps to find a treasure.
We Detector Power have hobby metal detectors for gold, coins, relics, and depths manufactured with the highest quality standards and the most recognized brands in the United States and Europe.
If you have any questions, we have technical support in Spanish that will answer you 24/7.
Happy treasure hunt!
Category: Uncategorized
Leave a Reply Cancel reply